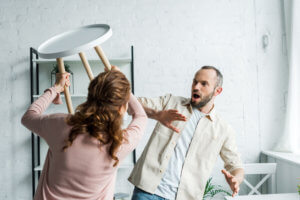 In New Jersey, there are a wide variety of scenarios that may give rise to charges for aggravated assault under N.J.S.A. 2C:12-1(b). The law regarding aggravated assault is highly nuanced, with factors including: the degree of injury sustained by the victim; the use of a weapon; the identity of the victim (was he or she a law enforcement officer or public servant?); and whether or not the offense was committed in conjunction with another crime such as carjacking, or while attempting to elude police. Considering the many variables that influence an aggravated assault charge, these offenses range in severity from fourth degree to second degree crimes. The penalties associated with a conviction increase accordingly, from an 18-month prison sentence, to up to 10 years of incarceration. However, in any case involving charges for aggravated assault, the defendant faces criminal indictment and prosecution at the Superior Court level. This means that he or she will become a convicted felon if ultimately found guilty.

William Fay is an accomplished criminal defense attorney with years of experience representing clients charged with criminal offenses such as aggravated assault, robbery, terroristic threats, and possession of a weapon for an unlawful purpose in the South Jersey area. In fact, he uses his experience as a former Deputy Attorney General investigating and litigating in the New Jersey Office of the Attorney General, to achieve the best possible outcomes for clients in his criminal defense practice. Through his diligent work and dedication to his clients, Mr. Fay has delivered countless positive results for clients throughout Camden County, including in Runnemede, Gloucester Township, Pennsauken, Voorhees, and Cherry Hill. Utilizing his extensive knowledge and resources in the realm of criminal law, Mr. Fay provides unparalleled defense representation. To receive a free consultation about your case today, contact his local offices at 609-832-3202.

What is Second Degree Aggravated Assault in NJ?

A second degree charge for aggravated assault applies when a person attempts to cause serious bodily injury or actually causes such an injury, purposely or knowingly or recklessly, under circumstances manifesting extreme indifference to the value of human life. It can also apply when a person causes bodily injury while fleeing or attempting to elude a law enforcement officer or unlawfully operating a motor vehicle. A conviction for second degree aggravated assault may result in a sentence to serve between 5 and 10 years in New Jersey State Prison, as well as a maximum fine of $150,000. Not only is a 2nd degree aggravated assault charge punishable by up to 10 years of incarceration, but there is also a presumption that you will be sentenced to prison even with no prior criminal record. On top of that, this level of offense is subject to the No Early Release Act (NERA for short), requiring those convicted to serve 85 percent of the given sentence before reaching parole eligibility.

What is Third Degree Aggravated Assault in NJ?

A third degree charge for aggravated assault applies when a person attempts to cause significant bodily injury or actually causes such injury, purposely or knowingly or recklessly, under circumstances manifesting extreme indifference to the value of human life. It can also apply when a person commits a simple assault upon, or points a firearm at: a law enforcement officer, fireman, emergency medical services technician, school board member, school administrator, teacher, school bus driver, employee of the Division of Youth and Family Services, Supreme Court justice, or judge of the Superior Court, Tax Court, or Municipal Court. A conviction for third degree aggravated assault may result in a sentence to serve between 3 and 5 years in New Jersey State Prison, as well as a maximum fine of $15,000.

What is Fourth Degree Aggravated Assault in NJ?

A fourth degree charge for aggravated assault applies when a person recklessly causes bodily injury to another with a deadly weapon, or knowingly under circumstances manifesting extreme indifference to the value of human life, points a firearm at or in the direction of another, whether or not the actor believes it to be loaded. A conviction for fourth degree aggravated assault may result in a sentence to serve up to 18 months in New Jersey State Prison, as well as a maximum fine of $10,000.

Is Aggravated Assault a Felony in New Jersey?

When a person is charged with aggravated assault, it is a felony crime in all cases. If you are charged with aggravated assault in a Camden County town such a Bellmawr, Berlin, Haddon Township, Stratford, or Winslow, your case will be prosecuted by the Camden County Prosecutor’s Office in the Camden County Superior Court. Indictable crimes are the technical term for felonies under NJ state law. These types of charges are graded according to degrees, with first being the most serious and fourth being the least. Aggravated assault charges vary from fourth degree, to third degree, and second degree when the nature and extent of the offense is considered extreme. Nevertheless, all of these crimes are indictable in nature, meaning your case must be presented to a grand jury for indictment before heading to trial. In some cases, the charges can be resolved before this stage, whether it be during a Pre-Indictment Conference or other pre-trial proceedings. Regardless of the particular degree of your charge for 2C:12-1(b), understanding all of your options and having an experienced criminal lawyer defending your case is imperative if you are seeking to achieve the best results.

Charged with Aggravated Assault, Will I be Released while my Case is Pending?

Given the gravity of aggravated assault charges, you may be arrested and held in detention while your case is going on. Since New Jersey implemented criminal justice reform, the money bail system has been replaced by a system in which a defendant’s history and unique case is examined in order to make a detention decision. This means that the Camden County Prosecutor’s Office has the option to file a motion to have you detained based on allegations of aggravated assault, particularly when the case involves domestic violence. Since one of the critical criteria is the potential danger you may pose, domestic violence accusations can be especially problematic during detention hearings, underscoring the need for knowledgeable legal representation. William Fay and our defense team can assist you with a detention hearing for assault and all of the hearings thereafter. We also handle defense against final restraining orders, which are common in assault cases.

If you or someone you love has been charged with aggravated assault in Camden County or elsewhere in South Jersey, the time is now to begin developing an aggressive defense strategy. Contact our firm at 609-832-3202 for additional information and a cost-free consultation.