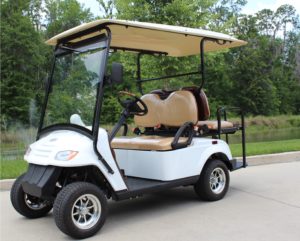 A Burlington County man is facing DWI charges after allegedly driving a golf cart drunk. The man, a resident of Cinnaminson, New Jersey, is accused of attempting to run over a rooster while driving under the influence.

According to reports, 34-year-old Cinnaminson resident Daniel H. Jones was driving a golf cart with two passengers in Key West, Florida, on Friday, March 10th at approximately 6:15 p.m. when the incident occurred. Officials say Jones was driving on the street when he swerved toward a rooster, overturned the vehicle, and sent all of its occupants flying.

No major injuries were sustained during the incident and the rooster escaped unscathed, but officials tested Jones’ blood alcohol concentration (BAC), which reportedly registered at 0.25 percent. He was subsequently charged with DWI, as well as DUI resulting in property damage and minor injury.

In New Jersey, the legal limit for blood alcohol content while driving is 0.08% for those who are 21 years of age or older. Thus, if you are found operating a motor vehicle with a BAC of 0.08% or greater, you can be charged with driving while intoxicated (DWI). Notably, if you are under the legal age to consume alcohol, you can be charged with underage DWI if you are found driving with any amount of alcohol in your system.

Under New Jersey’s DWI law, found in section N.J.S.A. 39:4-50(a), it is unlawful to operate a motor vehicle while under the influence of an intoxicating liquor, narcotic, or habit-producing drug. The penalties associated with driving under the influence are varied, depending on the driver’s blood alcohol content at the time of the offense and if he or she has been convicted of any previous DUI offenses.

If you are convicted of DWI in New Jersey, you may face a driver’s license suspension ranging from 3 months to 10 years, depending on the specific charge against you. For instance, you may be charged with a first offense DWI, second offense DWI, or third/subsequent DWI offense. The penalties become increasingly severe as the number of prior DWI’s increases. Also, first offense DWI’s are divided into two categories: driver’s with a BAC from 0.08% to 0.10%, and those with a BAC above 0.10%. As you might expect, penalties for a higher BAC are more severe.

Additional consequences of a DUI conviction include motor vehicle surcharges, community service, fines and court fees, mandatory attendance at a state-approved Intoxicated Driver Resource Center (IDRC), an ignition interlock device installed in your vehicle during the period of license suspension and between 6 months and 3 years following license restoration, and even time in jail. Collateral consequences can also include steep increases in your car insurance premiums.

In this case, if Mr. Jones is convicted of DUI in Florida, this can significantly impact his life in New Jersey. New Jersey acknowledges out-of-state DWI convictions and may impose a driver’s license suspension, as well as NJ Motor Vehicle surcharges, once they become aware of the out-of-state DWI. In addition, if Jones is charged with a DWI in New Jersey in the future, this would be charged as a subsequent offense, even though the first DWI did not occur in New Jersey.