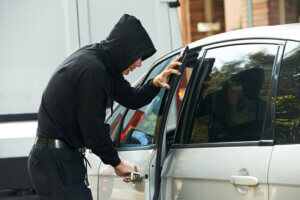 You might mistake car burglary for a different crime, like theft. Burglary is a term most associated with house invasions but breaking into a car or a house is no different in the eyes of the law. The penalties are equally severe under New Jersey statute 2C:18-2. You could face third or second degree criminal charges if you illegally enter or remain on or in someone’s property, including a car, motor home, RV, or other vehicle considered a “structure,” for purposes of the law.

A car burglary occurs when an individual unlawfully and intentionally enters or remains in another’s “structure” to commit an illegal act. Intention or knowledge that the burglar does not have permission to enter or stay in someone’s structure is an element of the crime. N.J.S.A. 2C:18-2 defines burglary as either unlawfully entering or remaining in someone’s structure, including a vehicle. So, typically, someone entering a store when it is closed knows the structure is not open to the public. Entering it would be burglary if they entered the store to steal something.

For car burglary likewise, an individual who unlocks a locked car or breaks a window to get in knows the vehicle is not open for anyone’s use or entry. Going into a locked vehicle to commit a crime is burglary. Even going into an unlocked vehicle can be burglary. When the intruder knows they do not belong in another’s vehicle but enters, nevertheless, they commit burglary if they take something from the vehicle without permission or otherwise commit an unlawful act. Alternatively, remaining in a vehicle without permission is also prosecutable as burglary. For example, someone who slept in an RV for a night with the owner’s permission is a burglar if they remain in the RV after their permitted stay ends to commit a crime, like theft.

What is the Penalty for Car Burglary in New Jersey?

A standard car burglary is charged as a third degree crime, for which a conviction can result in a three (3) to five (5) year prison sentence and a $15,000.00 fine. Furthermore, if an attempted or successful burglary results in harming or threatening harm to another, the penalties increase. It is a second degree crime to hurt someone physically or threaten them with immediate injury while committing burglary. In addition, showing a gun, explosive device, or other deadly weapon during the commission of a burglary is a second degree crime. Second degree crimes come with five (5) to ten (10) year prison sentences and up to $150,000.00 in fines for a conviction.

Even first-time offenders face stiff penalties for third degree burglary. And while a third degree crime carries a presumption of non-incarceration, that may not be the case if there are aggravating circumstances and other crimes besides burglary. Likewise, Pre-Trial Intervention, a diversionary program for first-time offenders, may be unavailable if the burglary involved violent behavior that elevated it to second. degree burglary. Pre-Trial Intervention is meant to keep first-time offenders out of prison so that they can rehabilitate and retake their lives. With no criminal conviction on their records, they can start over without the disadvantage of incarceration and a criminal record. However, the prosecuting attorney admits applicants into the program, and not all may be eligible without the help of an attorney to argue for a diversion over incarceration.

Car Burglary and Other Crimes

For sentencing purposes, burglary is a separate crime from theft or another crime that may occur after the initial entry. And case law affirms that un-permitted entry with criminal intent is all it takes to commit burglary. Thus, burglary with a gun, including theft, may resemble robbery, but they are separate crimes with separate sentences. In State v. Pyron, 495 A. 2d 467 – NJ: Appellate Div. 1985, a jury found Pyron guilty of burglary, robbery, criminal constraint, and terroristic threats after he illegally entered the victim’s home, handcuffed her, and threatened to kill her while he stole her property. The judge merged the burglary and criminal restraint with the robbery charge, but the Appellate Court overturned the sentence, noting that burglary is complete upon unlawfully entering a structure to commit an offense. And if the burglar commits the offense, that is a separate charge.

On the other hand, joyriding, a disorderly persons offense for temporarily depriving a vehicle owner of their vehicle, does not become burglary upon entering the car to commit a crime, according to the court in State v. Benford, 614 A. 2d 659 – NJ: Superior Court, Law Div. 1992. In that case, the Superior Court ruled that when a defendant enters a car to joyride, the crime is joyriding, not burglary, despite the illegal entry to commit an offense. After reviewing the legislative intent of the competing joyriding and burglary statutes, the court determined that the legislature intended to punish joyriding less severely than burglary. Thus, charging one who intended to joyride when entering a vehicle with burglary thwarts the legislative intent to punish joyriding less severely.

The court in State v. Martes, 628 A. 2d 817 – NJ: Superior Court, Law Div. 1993, however, disagreed with the Benford court, reasoning that joyriding, or any disorderly persons offense, is a separate offense from burglary. Entering a structure (vehicle) to commit an offense is the essence of burglary, regardless of the crime. Other disorderly persons offenses, such as stealing a $200.00 radio inside the vehicle, would be burglary and a disorderly persons offense of theft, without thwarting the legislative intent of punishing lower-level crimes with lesser sentences.

The court took issue with Benford in distinguishing that joyriding is the taking of the vehicle. Thus, the crime is not committed within the structure or car, analogizing it to vehicle theft and burglary, two separate charges in prior case law. And in State v. Jijon, 624 A. 2d 1029 – NJ: Appellate Div. 1993, the Appellate Court put the issue to rest. They disapproved of the Benford court ruling, emphasizing the precise definition of burglary and that the burglar does not have to complete the offense they intended to commit for it to be burglary.

What Happens in Juvenile Car Burglary Cases in New Jersey?

When a juvenile commits car burglary, they are headed to Family Court for adjudication and sentencing. They may get up to two years in a juvenile detention facility. Still, They may also get a sentence tailored to the individual juvenile’s needs for resources that encourage rehabilitation rather than punitive detention. A Family Court judge may find probation more suitable for youth with family strife and psychological needs rather than detention if it is in the minor’s best interests. Juvenile charges are generally handled with a greater interest in avoiding the most severe punishments, instead, focusing on rehabilitating the minor and setting them on the right path moving forward. A good juvenile lawyer can assist with accessing all of the available options in your child’s case if you have a juvenile charged with car burglary in New Jersey.

Can Car Burglary be Expunged from my Criminal Record?

Fortunately, you can expunge a car burglary conviction from your record after five years from completing your sentence if you have only one indictable crime and no more than three disorderly persons offenses on your record. But you should always consult an expungement attorney to verify your expungement eligibility.

Having an indictable crime in your criminal history can disrupt job, housing, and educational prospects, not to mention leading to imprisonment and harsh consequences that can derail your life for years. As such, you should seek the help of a tested and trusted criminal defense lawyer at our Camden County law office if charged with a car burglary offense. You should first challenge the burglary charge with help from an aggressive criminal lawyer who can examine all of the facts and evidence and defend you at trial if you cannot reach a favorable plea agreement or get a diversionary program to avoid conviction altogether. You may have valid defenses for a dismissal or acquittal. The prosecutor must prove you intended to commit a crime, which may be an impossible burden. Speak with a criminal defense attorney now by calling 609-832-3202 for skilled counsel to contest your New Jersey car burglary charges.