Standardized Field Sobriety Tests (SFST) are standardized tests law enforcement uses on the roads and other public places to test drivers for impaired driving due to alcohol or drugs.

When are SFST’s used?

Police use SFST’s to confirm suspicions of a driver’s intoxication at an accident, a traffic stop, or a DWI checkpoint. So, when an officer observes a driver’s behavior and believes the driver may be drunk, they may conduct a field sobriety testing. First, however, officers must observe signs of intoxication. For example, the driver may slur their words or avoid eye contact. They may have bloodshot eyes or smell of alcohol.

What is the Purpose of Field Sobriety Testing?

The police use the test results as evidence of intoxicated driving. With evidence the driver violated traffic laws, the police may charge the driver with driving while intoxicated (DWI) based on probable cause the driver drove impaired and therefore, broke the law.

What are the 3 Approved Field Sobriety Tests in New Jersey?

The three SFST’s sanctioned by the National Highway Traffic Safety Administration (NHTSA) are the Horizontal Gaze Nystagmus, the One Leg Stand, and the Walk and Turn tests. New Jersey law enforcement officers use these tests.

What Happens in the One-Leg Stand (OLS)?

Like its name suggests, the test requires the suspect to stand with one leg raised 6 inches off the ground while they count to 30. An officer instructs them to keep their hands at their sides and remain in the position for the entire count, without raising their arms, lowering their foot, hopping, swaying, or falling. If the officer observes the driver failing to follow directions, they note this as a sign of driver intoxication.

What Happens in the Walk and Turn (WAT)?

With the WAT, an officer instructs the driver to walk a 9-step straight line heel to toe, counting the steps out loud. Then, they must turn around for another 9 steps heel to toe in the opposite direction. The driver must wait for instructions while standing on a line with their hands down. Again, not following directions, meaning starting the test early, not walking heel to toe, counting the steps, raising their arms, or losing their balance, are failures. The officer may note the failures as evidence of probable intoxication.

What Happens in the Horizontal Gaze Nystagmus (HGN)?

The officer then checks for signs of nystagmus, an involuntary jerky eye movement up and down or side to side, even in circles. If the driver must move their head to complete the test, look away from the object, or nystagmus occurs, the officer may interpret those failures as signs of intoxication. Nystagmus happens most often to intoxicated people, so the test is the most accurate of the tests. 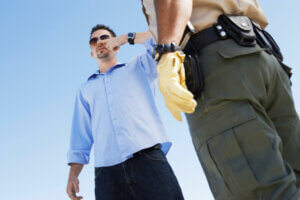 Although law enforcement uses field sobriety tests throughout the country, that does not validate their accuracy. Since officers administer tests, human error configures into the equation. A test is only as good as the instructions the officer gives to the test subject. For example, the WAT requires many steps and actions the driver must take to perform it properly. An officer who is unclear or gives the steps out of order may confuse a driver and then penalize them for not following instructions. Moreover, the results of all three NHTSA-sanctioned standardized FST’s officers use are only 82% accurate. A multitude of defense attorneys maintain that the tests are not reliable at predicting a driver’s blood alcohol concentration or their ability to operate a motor vehicle. Thus, they have repeatedly raised the issue that the tests are not a scientific method upon which to charge a driver with a DWI.

Many factors can interfere with the accuracy of an FST. For example, physical and mental disabilities and injuries may affect how a driver performs. In the case of a driver of advanced age with hip arthritis, holding one leg up may cause enough discomfort to create imbalance and a dropped leg. Other medical conditions affect balance or eye movement. One common condition, an inner infection, could destroy an individual’s balance as does vertigo.

Nervousness and fatigue also affect how a driver performs on the tests, as do the weight, clothing, and shoes of a driver and environment where the FST occurs. Poor lighting, rocky surfaces, weather conditions, and noisy areas may affect how a person is able to respond to officer instructions and perform the tests.

Can an Attorney Dispute the Results of Field Sobriety Tests in a DWI Case?

Drunk driving defense attorneys typically challenge FST results. For one, they are highly subjective. An officer’s observations can certainly be untrustworthy, depending on the circumstances and location of the stop, just as those factors affect a driver’s performance. Additionally, the officer’s directions also affect outcomes. Moreover, the FST merely provides circumstantial evidence, not proof of a driver’s impairment and inability to drive safely. Test results are not conclusive evidence. In fact, the law does not mandate a driver to submit to an FST.

An attorney may also capitalize on the tests being less reliable than chemical analyses, such as blood or breathalyzer tests. Even chemical tests are subject to human error in conducting and preparing a person arrested for DUI for them. The FST is even more flawed, so an attorney may question an officer’s testimony in detail to expose the issues and reasons for inaccuracy of the tests.

When Should I Contact an Attorney if I was Arrested for DUI?

You should contact an attorney immediately after arrest. Many procedural errors may occur at initial police stops, investigations, searches, and arrests. An attorney can find out everything there is to know about your arrest, field sobriety testing, breath testing or blood sampling, questioning, police procedures throughout, and so much more to protect you against a DUI conviction. Additionally, the sooner you can speak to an attorney, the more informed you will be about what you should and should not do or say to preserve your defense at a trial.

If you would like to speak with a seasoned DWI lawyer at our firm about your case, please call (609)-832-3202 or request a free consultation online today. We defend clients in Camden City, Haddonfield, Voorhees, Pennsauken, Collingswood, Lindenwold, Runnemede, Gloucester, and other Camden County and Southern New Jersey areas. When you are confronted with the penalties for DWI, our attorneys passionately fight for you, combining advanced training, education, and practical skill in defending you to the fullest extent of the law.