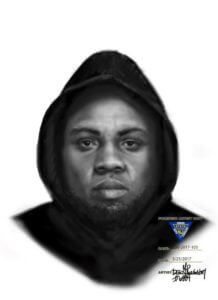 Delanco Township authorities have opened an investigation into an attempted robbery that occurred earlier this month. Authorities recently released a composite sketch of the suspect, who allegedly attempted to rob a pizza delivery driver in a local housing complex.

The incident in question occurred at approximately 9:20 p.m. on Thursday, May 18th in the vicinity of Heron Court in the Rivers Edge development in Delanco Township. According to Delanco Police, the suspect, described as a middle-aged man wearing a black hooded sweatshirt and gray sweatpants, approach a pizza delivery driver and demanded money. Fortunately, the driver immediately fled the area and was not injured.

Investigators have asked that anyone with information related to the suspect or the alleged robbery reach out to the Delanco Police Department at 856-461-0357, extension 351. If law enforcement officials ultimately identify and apprehend the suspect in connection with this case, he may face charges for robbery or attempted robbery.

In New Jersey, robbery offenses are taken extremely seriously, and as such, they are graded as either first degree or second degree crimes. For robbery crimes involving weapons, and those in which a victim is hurt or threatened, the charges are typically first degree. On the other hand, typically robbery offenses are graded as second degree crimes. Both levels of robbery charges are also governed by the No Early Release Act, which includes a mandatory period of parole ineligibility set at 85 percent of the total sentence imposed.