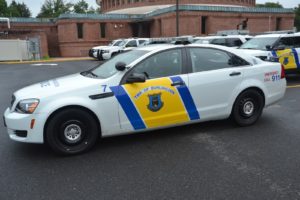 On Thursday, a 19-year-old driver in Burlington, NJ was arrested and charged with driving while intoxicated (DWI) and felony possession of cocaine. When the driver was stopped by police, they allegedly smelled alcohol on this breath. He registered a blood-alcohol content level of 0.11. The police reportedly found open containers of alcoholic beverages in his motor vehicle, as well as cocaine. He was taken to Burlington County Jail in Mount Holly, NJ for processing.

This incident illustrates how a single motor vehicle stop can lead to multiple criminal charges. In order to pull over a vehicle, police must have reasonable suspicion of a violation of the law. Reasonable suspicion requires suspicion of a violation based on specific facts that the officer can articulate. If a driver is speeding, swerving, breaking a traffic law, or doing anything that could indicate they are under the influence of drugs or alcohol, the police can pull them over and the driver is required by law to stop.

Typically, in order to protect an individual’s 4th Amendment right against unreasonable search and seizure, police must have a warrant to conduct a search of your personal property. A few exceptions apply including, but not limited to, evidence in plain view and a search of a motor vehicle with probable cause.

Under the “plain view” doctrine, the police may seize evidence of a crime or contraband that they are able to observe in plain view from a place they are lawfully located.

The motor vehicle exception to a search warrant allows police to search a vehicle for evidence of a crime or contraband if they have probable cause to believe that a crime has been committed and a search is likely to produce evidence of that crime. Note that probable cause is a higher standard than reasonable suspicion.

Once the police make a traffic stop based on reasonable suspicion, they may observe specific facts that create probable cause to search the motor vehicle. In a situation similar to the case involving the 19-year-old man in Burlington County, NJ, described above, if a police officer smells alcohol on the breath of a driver, they will likely administer a breathalyzer test. New Jersey has an implied consent law, which requires drivers to submit to breathalyzer tests or face serious penalties.

A variety of factors, including failing a breathalyzer test, having the smell of alcohol on your breath, your behavior, and your speech, could establish probable cause for the officer to place you under arrest for driving while intoxicated.

Those bottles can also create probable cause for the officer to search the vehicle for additional evidence that you are driving under the influence and/or driving with open bottles of alcohol. In addition, if you are placed under arrest for DUI, the police may search your vehicle for evidence related to your arrest without a warrant under the search incident to a lawful arrest exception. Note that under this exception the police are only allowed to search for evidence related to the charges you are being arrested for. For example, absent additional probable cause, the police could not search your vehicle for drugs if you are being arrested for driving with a suspended license.

During a lawful search of a vehicle, if the officer finds drugs—like the cocaine found in the case of last week’s Burlington County driver—you can also be charged with possession of a controlled dangerous substance (CDS).

While an officer would not have the right to pull you over and search your vehicle for drugs without having reasonable suspicion to pull you over in the first place, you can see from this example how one lawful traffic stop can potentially lead to multiple charges.

If you are facing charges that arose from a traffic stop in Burlington County, New Jersey, contact our experienced criminal defense lawyers to review your case and determine what defenses may be available to you. our criminal defense law firm is thoroughly equipped to defend your innocence, so call 609-832-3202 or send us a message today to arrange a free consultation.

On Thursday, a 19-year-old driver in Burlington, NJ was arrested and charged with driving while intoxicated (DWI) and felony possession of cocaine. When the driver was stopped by police, they allegedly smelled alcohol on this breath. He registered a blood-alcohol content level of 0.11. The police reportedly found open containers of […]