Vandalism at Cinnaminson Church May Result in Criminal Charges 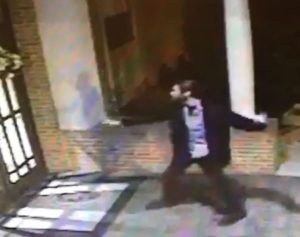 Authorities from the Cinnaminson Police Department are currently investigating a vandalism incident at a local church that has been deemed a “bias crime.”

The incident in question occurred just after 3:00 o’ clock in the morning on Sunday, May 7th, at Saint Charles Church, located at 2500 Branch Pike in Cinnaminson, New Jersey. Surveillance video at the church captured the crime, during which a male suspect threw rocks at the front door several times. The man, who remains unidentified, appears to be a white male with a beard and long brown hair, fastened in a bun at the time.

At approximately 7:00 a.m., maintenance workers at the church discovered broken glass in the front door. Shortly thereafter, Cinnaminson police received another report of a brick thrown through a window at another church, specifically, the New Apostolic Church located at Branch Pike and Pomona Road. Officials believe that these were “bias crimes” and have asked that anyone with information regarding the incidents or the suspect immediately contact Cinnaminson Police at 856-829-6667, extension 2061 or the anonymous tip line at 1-800-78-Crime.

If investigators ultimately identify and charge a suspect in connection with this case, he may face criminal charges for a hate crime, criminal mischief, and other offenses.

What is a Bias Crime in New Jersey?

In New Jersey, a bias crime, often referred to as a “hate crime,” can refer to any illegal conduct that is intended to intimidate or threaten a person or group based on race, color, religion, gender, disability, sexual orientation, gender identity or expression, national origin, or ethnicity. The most common hate crime is known as “Bias Intimidation,” which is discussed in New Jersey Statute 2C:16-1. According to this statute, bias intimidation can refer to any offense outlined in chapters 11 through 18 of the New Jersey Criminal Code that is committed or attempted with the purpose of intimidating the victim. The underlying offense in a bias intimidation case can range from simple assault, to criminal mischief, harassment, aggravated assault, and terroristic threats. Notably, a person convicted of bias intimidation will face separate penalties in connection with the underlying offense if they are found guilty of both crimes. In other words, a charge for bias intimidation does not prevent you from also being charged with harassment, assault, criminal mischief, etc.

In cases involving bias crimes and criminal mischief offenses, the consequences can be severe. It is essential to protect yourself, which is why having an experienced criminal defense attorney on your side can spell the difference between a positive and negative outcome. If you are facing charges in South Jersey, criminal defense attorney William Fay is available to answer your questions with a cost-free consultation. Simply call 609-832-3202 anytime to discuss your case.

To watch the video and learn more about this case, access the following link: Cops looking for guy with man-bun who vandalized church

Vandalism at Cinnaminson Church May Result in Criminal Charges

Authorities from the Cinnaminson Police Department are currently investigating a vandalism incident at a local church that has been deemed a “bias crime.” The incident in question occurred just after 3:00 o’ clock in the morning on Sunday, May 7th, at Saint Charles Church, located at 2500 Branch Pike in […]