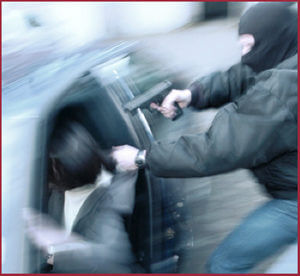 Authorities in Burlington City recently arrested four suspects whom they now believe are responsible for a carjacking and an attempted bank robbery that occurred within a span of three days.

The first incident occurred on Monday, February 6th, at which time a man delivering Chinese food was allegedly carjacked outside of the Burlington Court Apartments. The second incident reportedly occurred just days later, on Thursday, February 9th, at the Cornerstone Bank in Burlington City. According to police, the robbery was unsuccessful but the suspects eluded police by fleeing the scene.

Following investigations into both incidents, law enforcement officials identified 25-year-old Burlington City resident Keith Colluzo, 20-year-old Burlington City resident Khadejah Randolph, 19-year-old Trenton resident Earnest Scott, and 23-year-old Camden resident Brianna Thomas as the primary suspects. Colluzo, Randolph and Thomas were all taken into custody and are being held in the Burlington County jail. Scott is currently in custody in Philadelphia in connection with other charges and will be extradited to New Jersey.

Per reports, there was no weapon involved in the bank robbery attempt; however, a handgun was involved in the carjacking. This means that the defendants in this case may face additional weapons charges for unlawful possession of a handgun or possession of a weapon for an unlawful purpose. When these weapons offenses involve handguns, they are considered second degree crimes, which may result in an NJ State Prison term of 5 to 10 years. In addition, these handgun charges are governed by New Jersey’s Graves Act, which means the minimum period that a person can serve in prison is 3 years before they become eligible for parole.

Notably, carjacking and robbery offenses are very similar as described in the New Jersey Criminal Code. However, carjacking offenses always involve theft of a motor vehicle. Carjacking is addressed in section N.J.S.A. 2C:15-2 and is classified as a first degree crime, which is the most serious level of offense in New Jersey. In fact, carjacking is considered so egregious that it is subject to extended sentencing guidelines and a minimum period of parole ineligibility for those convicted.

Although typical first degree crimes entail a New Jersey State Prison sentence ranging from 10 to 20 years, carjacking is punishable by between 10 and 30 years of incarceration. In addition, a person convicted of carjacking is subject to a minimum 5-year period during which he or she is ineligible for parole. Clearly, the defendants in this case are facing severe penalties if they are ultimately found guilty. Each of them will need an aggressive and compelling defense to achieve the best possible outcome.

William Fay is a highly experienced Burlington County criminal defense attorney who regularly represents clients charged with robbery, carjacking, and other theft offenses in Willingboro, Mount Holly, Pemberton, and throughout South Jersey. If you or someone you love is facing criminal charges in Burlington County or elsewhere in South Jersey, contact our criminal defense law firm today at 609-832-3202 to discuss your case and receive a cost-free consultation.

Authorities in Burlington City recently arrested four suspects whom they now believe are responsible for a carjacking and an attempted bank robbery that occurred within a span of three days. The first incident occurred on Monday, February 6th, at which time a man delivering Chinese food was allegedly carjacked outside […]